50 YEARS OF GREENLAND - The Anniversary Tour
It was the last one !

Exclusive Greenland tour in the footprints of the Arctic Pioneers...

With the name "Thule" we associate many famous pioneers, e.g. Robert E. Peary, who first conquered the North Pole, Knud Rasmussen, Peter Freuchen, Fridtjof Nansen...
Thule has been the start-off point for many important conquests in Arctic history. Until today Thule is difficult to reach.
Thule is also the home of the northernmost Eskimo, the "Polar Inuit", who are still maintaining their traditional lifeways as hunters. In winter, they entirely travel by dog-team, having banned the snow-scooters. Your expedition-leader has been living quite some time among them, he knows them, is talking their tongue. His friends will accompany you during this tour. Accordingly, this expedition offers the rare window to a way of life, which has disappeared elsewhere.
We'll travel with the hunters by their means, roughly by the same conditions which Peary had to his avail a hundred years ago. You will undergo a real adventure in an environment which has not changed since and experience outstanding winterly sceneries in one of the remotest regions on earth.

1st day:
Flight to Copenhagen. Overnight in the hotel.
2nd - 3rd day:
Flight Copenhagen via Kangerlussuaq to Ilulissat You'll have the opportunity to visit this famous little town at Greenland's west-coast. Two Overnights in the hotel.
4th day:
Transfer to the airport, flight to Thule-Qaanaaq across a marvelous winterly landscape, transfer to the guest-house. We'll stay for two nights, check the equipment and shall prepare for our trip first.

5th day:
This day serves us to adapt to the clima. We'll walk around in the Inuit-settlement with approx. 650 inhabitants, supply our food, check the equipment and prepare for the tour.

6th day:
We set out to our sledge-journey. Every participant has his own sledge and dog-team-leader. The equipment will be tied on the sledges and after that, you'll hear the whips of our Eskimo companions. We drive across the frozen sea, traveling in a fantastic landscape of unbelievable vastness. Every 1.5 hours, we'll have a tea-break to warm up.
After a long day we shall reach the northernmost village of the world: Siorapaluk. The friendly people will come to the beach to welcome us. We'll stay overnight in a hut.
7th -12th day:
The next route is going to be remote. Already during the old times, the Inuit travelled further North to Neqe and Pitorarfik during this season. The reason are so-called "Polynias", areas with constant open water, even during hard winters.
That's the place to see and catch walrusses. If you like to, we might accompany the Inuit once they are catching some animals from the ice-edge with their harpoons.

By the way: they are not hunting for pleasure. They badly need the meat to feed their dogs. Hunting is their existence. If you are too sensitive, better stay away.

If the ice is too thin for a trip to the North, we'll visit glacier closely. After a second night in Siorapaluk we turn South again and follow the "Mc Cormick-fjord" eastward to it's far end. We'll build up our camp in a river-bed, where salmon is being caught during summer.
Part of the group may stay in a small cabin, others in Eskimo tents, which are being heated by two stoves.

The following day will be very spectacular, crossing two frozen lakes and sqeezing in between two glaciers, which lead down to the Bowdoin Fjord. At the end of the day we reach Kangerdluarssuk, a big old hut, which has been built during Peary's time.
We might stay two nights here, with an excursion to a majestic glacier the following day. The Eskimos will be looking for "Utoq" on the way, sun-bathing seals on the ice.

We'll continue to the biggest fjord of the Thule District the Inglefield Bredning, shall reach Koinissut, an old whaling place being used for centuries. The bones are hardly covered by snow, we also see the remains of old turf-houses.
The landscape changes now, is getting steep, the mountains high. Now and then our companions will stop again to watch out for seals.
We finally reach a fantastic crystal world of ice and snow, will be surrounded by five glaciers flowing into the sea. During summer that's the place, where huge icebergs are "born". You will never forget this primeval panorama.
In the evening we'll in a tent or in a tiny bivouak cabin.

13th day:
Let us continue another day at slow speed. We may thus fully admire the majestic magnitude of the Tracy Glacier and the spectacular beauty of the Heilprin Glacier. We'll see Inuit while halibut fishing, slowly approach Keqertat in the evening, probably the least touched settlement in Greenland. It is also the most traditional village in the whole Thule-District.
14th day:
Keqertat has been the home of your expedition-leader years ago. Personal ties with the inhabitants, to former hunting-companions and their families don't vanish. We'll be very welcome here and will certainly enjoy the opportunity to share the daily routines of the Inuit.
15th day:
Our dog-team leaders will bring us across the fjord to Kangerdlussuaq, the place where the first missionary lived. There are still turf houses, which were inhabited until the Seventies and the remains of stone houses common during pre-European times.
We stay in a big hut.
16th day:
We'll drive back to Qaanaaq, passing the "fortress" of Qaanaaq, impressing lime-stone cliffs.
In the guest-house we certainly will appreciate the first shower after ten days in Arctic wilderness again.
17th day:
Opportunity to visit the museum and to do souvenir shopping.
Recommendable is a walk up ca 300 meters in altitude to a viewpoint, from where you'll see a spectacular panoramic view.
18th day:
Transfer to the airport in the afternoon, flight along the Greenlandic West-Coast to Ilulissat with a short stop-over in Upernavik.
In the evening we celebrate the expedition with an opulent Greenlandic dinner.
Overnight in the hotel

19 th day:
Flight to Copenhagen via Kangerlussuaq, late arrival,
overnight in Copenhagen in the hotel

19th day:
Flight to your home-destination


Kindly take note:
Average-temperatures in March,April are between -35 to -10 degrees Celsius. Daylight lasts already for 24 hours. That means, we may travel even at night.
This journey leads into a region with no touristic infrastructure. The comfort is very basic: There is no water for washing during the sledge-tour except for teeth brushing. Drinking water will have to be melted from ice
You will get a highly insulating mattress, but nevertheless, you will sleep on sledges or in simple cabins!

Important is: The outlined routing in this program has to be understood as a proposal. It is highly dependent on the actual ice- and weather-conditions. No-one can guarantee a fixed itinerary. Changes of the routing might occur and be necessary anytime. You are ready to acknowledge to this condition and you are willing to adapt to the pace, which is given to us by nature.

You are also ready to actively cooperate with your co-participants in all necessary activities, e.g. the establishment of the camps. Our Inuit-partners are equal to us and NOT our servants ! We want the expedition to be successful, that's why we all have to contribute our share.

Are you qualified?
The daily sledge-trips last three to eight hours. You should be healthy. Besides of that, no special physical condition is required. However: Patience and psychic calmness are important psychic characteristics in the Arctic. You should be equipped with it!

A valid passport is necessary.
We need your personal data upon booking (copy of passport).

Special suits and boots or Eskimo-fur-equipment can be rented
What is not included:
- lunch and dinners in restaurants, e.g. Copenhagen, Ilulissat, Qaanaaq;
- personal overweight charges
- additional charges for single room occupancy
- overnights and meals in case of flight-delays, if not accepted by the Airline
- entrance fees, travel insurances. 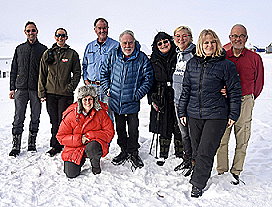 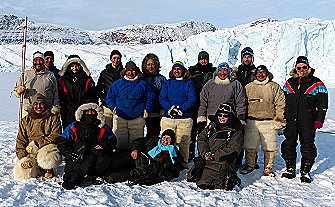