BEST OF POLAR TRAVEL - English Version
Kamchatka, East-Greenland, North Greenland, Patagonia, Tierra Del Fuego
If you like to see more about our tours:
A choice of the most beautiful pictures!
Protective Fee inclusive postage 10,- $US

Nauja - An Eskimo Child tells...
CD - ROM
From the series: CHILDREN-Stories from all-over the World
Foto-story, Memory and Quiz, Videos and Games
for children 6 years or more, but also for the adults
Weidmann & Biere Publishing, ISBN 932923-01-4, 19,- â‚¬
for Windows 98 and Windows XP

Nauja narrates about her world and the daily routines of the Inuit: "Where we live, how we play, how we learn, in my Igloo, Daddy on hunt, our legends and songs, when the Whites came...."
A combination-game challenges the young hunters. You'll have to load a sledge to prepare for a long sledge-journey. Don't think this is quite easy. Another game helps you to learn the language of the Inuit a bit. You also have the opportunity to check your knowledge about this culture and their environment playfully.
Order now!

The book deals with five Minority groups: The Eskimo, the Papuas in New Guinee, the Turkana in Africa, the Kalinga, head-hunters in North-Luzon (Philippines) and the Tangwah.
Every group is being mentioned by a descriptive chapter and a chapter about an adventure. With the Eskimo, this is the narration of the sledge-expedition from Greenland to Canada, polar-bear- and walrus-hunt, as well as a description of the difficulties, one has to overcome during such an endeavor.

The book is no longer available in book-stores, a few samples are still available here.
Order now!

Polareskimo Behavior (in German)
Behavior patterns in an old hunting culture
Ethno-Verlag, 514 pages,
ISBN 3-922330-99-1, available just in libraries.
The book focusses on the group-behavior of the Polar Inuit, their mechanisms of bonding, on aggression and aggression-control.

Inuit Art
The Art of the Eskimo
Museum of Anthropology, Stuttgart, A. Schulze-Thulin (Editor)
Available just in libraries.
Therein a chapter: "About the behavior and the craft-industry of the Polar Eskimo"

Something for your discussion: 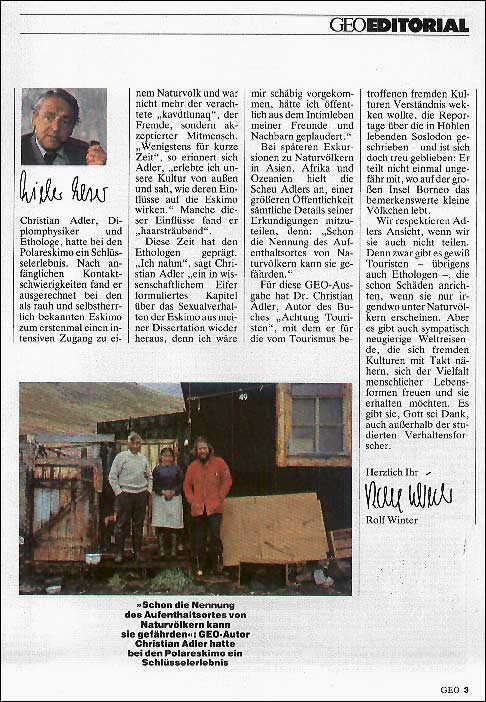